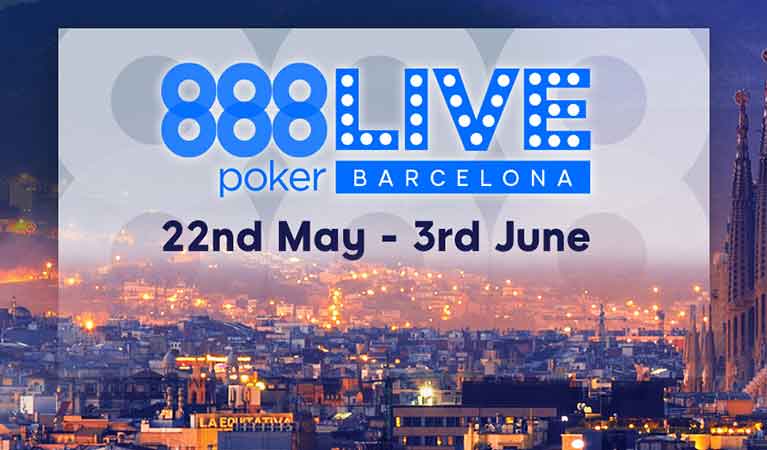 As always, there will be a decent number of headline events with the first big event being the €220 Opening Event that features a €150,000 guarantee and will run as from May 23-26. This event will have four opening flights from May 23-25 with the participating poker players starting off with 30,000 in chips – a maximum of two re-entries will be allowed for this particular event. Also, worth taking note of is the fact that the blinds are 30-minutes for the first three flights with the final one set to take place twice as fast with 15-minute blind levels. On May 26, the surviving players will play down to a winner with 40-minute blind levels.

The €2,200 High Roller will be the next big event and it will go down on May 29-30. It will also allow for unlimited re-entries during the late-registration period in addition to 45-minute blind levels throughout.

Perhaps the biggest highlight of the festival will be the 888poker Live Barcelona €1,100 Main Event that is scheduled for May 30 to June 30. This particular tournament will start off with three opening flights from May 30 to June 1 with the participating players starting off with 30,000 chips – they will be competing from 12 blind levels of 45-minutes each. There will also be unlimited re-entries during the late registration period as the players fight to make it to the money places where there will be no less than €550,000 in guaranteed prize pools.

How to Qualify for the Event at 888poker

The poker operator is hosting $109 satellites for an 888poker LIVE Barcelona Main Event package which is valued at $2,050. However, interested players will not even need to pay the $109 buy-in since 888poker is offering a different way of potentially winning a package through feeder tournaments whose buy-ins starts from as low as $0.01.

The winners of the 888poker LIVE Barcelona Main Event packages will get a chance to attend the festival in Spain with: