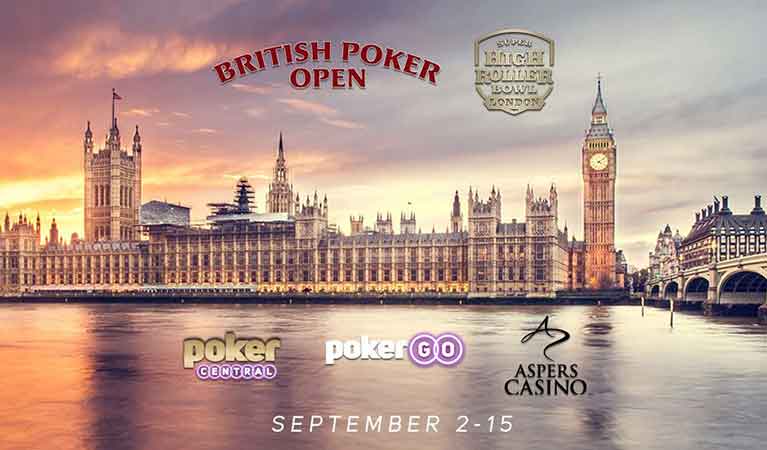 Poker Central has been hard at work expanding its portfolio of events and it seems the goal is to go to as many places across the globe as possible. The online poker broadcasting giant has recently announced two signature events that are set to go down in London – these are the British Poker Open festival and the Super High Roller Bowl London Event. This will be the very first time that Poker Central will be coming to the United Kingdom and considering the broadcasters impressive reputation, the events are set to be epic.

Since the rules and the regulations will be pretty much the same as those of the US Poker Open, the poker players who will participate will certainly have a lot to look forward to. For instance, just like other Poker Central high roller offerings, the first on-time entry in each of the British Poker Open tournaments will be rake-free. As if that is not enough, the player that will be lucky enough to earn the highest number of High Roller of the Year points during the festival will be crowned as the champion of the British Poker Open.

The Super High Roller Bowl is one of the Poker Central’s must-watch events and this is because it has been known to utilize a tried and tested formula that makes it very interesting and rewarding. The London leg of the tournament will have a £250,000 buy-in and a maximum of 49 entrants – 30 of these seats will be open and available while the remaining 19 will be VIP seats and will be reserved by Poker Central and Aspers Casino.

To stand a chance, the interested players will be able to reserve their seat in the event with a £25,000 deposit. A draw will then be held to determine the field.

Both the Super High Roller Bowl London and the British Poker Open will be held at the Aspers Casino in Stratford. The casino’s officials have expressed a lot of excitement about hosting the events not just because it is the very first time that they will be coming to the country but also because it will be a huge boost for the casino’s reputation.

Furthermore, the headline sponsor for both events will be PartyPoker LIVE. This is very exciting news especially because of how fast Partypoker has been growing thanks to its amazing offerings across several markets across the planet.