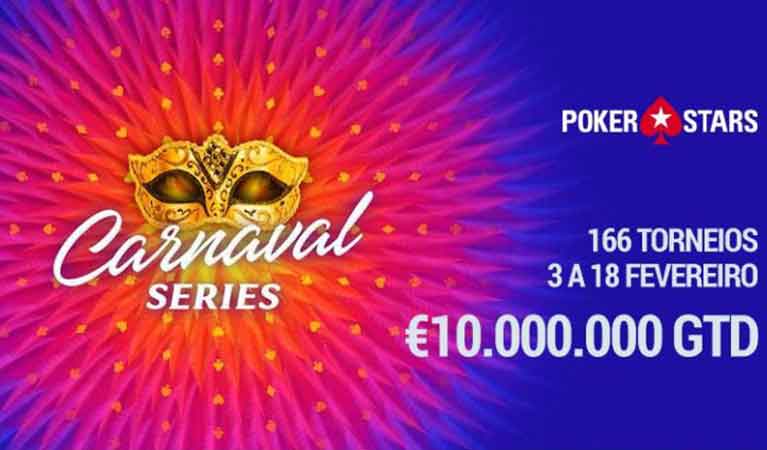 PokerStars’ Carnaval Series which recently came to an end is one of the biggest highlights of the year so far. The event saw thousands of players from Portugal, France, and Spain face off against each other at the shared liquidity tables where they went on to smash the advertised €10 million worth of combined guaranteed prize pools, making it one of the biggest tournaments ever held by the online poker operator.

Graced by over 34,500 players from all over the world, the Carnival Series which ran from February 3 to 18 awarded a total of €11,233,484 in prize money by the time event no. 166 crowned the final champion. This huge sum of prize money took the total tournament prize money awarded by the behemoth online poker operator since the launch of its shared player pool to a little over €75 million.

In addition to reaching a new milestone, PokerStars also broke its own record for the biggest-ever €30 buy-in tournament in terms of attendance in the region – a total of 3,760 entries were processed. The €50 buy-in Sunday Warm-Up event which guaranteed a whopping €225,000 was also well received by the players. For this particular event, a total of 5,000 entries were processed by the end of the late registration. The last man standing turned out to be “Vasudeva27”, a Spanish player who walked with the €30,000 cash prize.

Perhaps the most notable event during the PokerStars Carnival Series was the €250 buy-in Main Event that boasted of a €1 million guaranteed prize pool and attracted a filed of 3,905 fine online poker tournament players from Spain and France. Ultimately, there had to be a winner and this turned out to be “MEGACHIPLEADER1″ who walked away with the €123,376 prize money.

Well, the success of the PokerStars Carnaval Series is more proof of the potential of the Southern European market. As a result, many other online poker operators including PartyPoker, have begun taking a keen interest in that particular market. This is great news for the consumers as they are now assured of even more great offerings as well as a wide variety of products that they can choose from based on their personal preferences, bankroll, and tastes.

PartyPoker is currently running the second edition of its highly-praised Powerfest in association with France’s PMU.fr. The poker festival which kicked off on February 24 is set to run until March 12 and will carry a combined prize pool of €3.5 million which is, by all means, still very exciting.

How Adda52 Is Scaling Online Poker in India