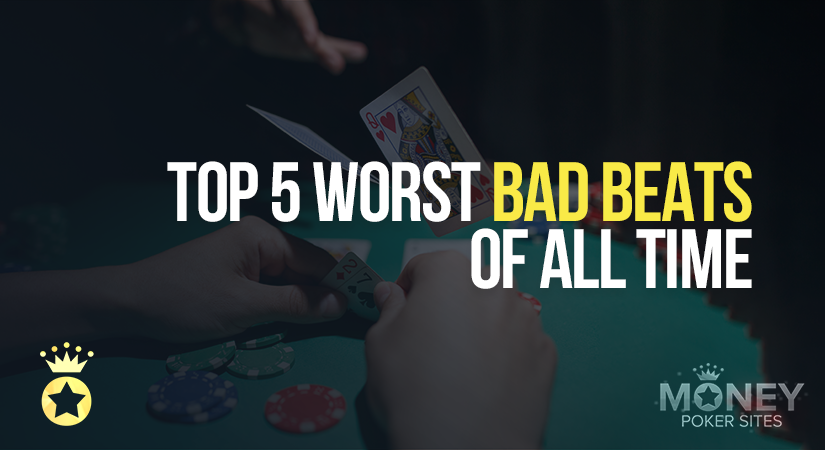 The world of poker is full of emotions. Sometimes, they are related to winning huge pots. However, they also might be related to losing your hands. Undoubtedly, one of the worst ways to fail is when a bad beat hand occurs.

As you may know, Bad Beat is a hand that is stronger but, indeed, loses, which usually occurs when your opponent makes a statistically poor call. Even though Bad Beats happen not quite often, some hands still remain in history, even in one of the biggest poker tournaments.

The key in those situations is to learn how to keep calm and look forward when the next big pot is awaiting you. Let’s now look at one of the worst bad beats of all time.

Vanessa Selbst is one of the most respected professional poker players who has already proved how well she plays. However, in the 2017 WSOP Main Event, Selbst with pocket Aces (A♠ A♦) was brutally eliminated by Baumann’s pocket sevens (7♥ 7♦).

The flop gave very complicated cards for this game, A♣ 7♣ 5♣, giving Selbst and Baumann a set. On the other hand, the third player, Schwartz, folded with his J 8 folds the hand.

But the real action just began. After the massive bets after the flop, the turn was 7♠, giving Selbst an Aces full, but Baumann got the Quads. The bet from Baumann after Selbst checked was almost double the pot, $1 700, and Selbst immediately raised to over $10 000.

The river card, which happened to be a 4♦, changed nothing. In the end, Selbst went all-in, eliminating her from the 2017 WSOP Main Event.

Mat Affleck was dealt pocket Aces (A♠ A♣), but Duhamel got a pair of Jacks (J♥ J♣). After the initial bet that brought the pot to almost $6 million, the flop is 10♦ 9♣ 7♥, which did not help any player directly, but has Duhamel the straight draw, who checked. Then Matt Affleck tried getting the most out of his opponent by betting $5 million. After Duhamell called, the pot size was at $18.4.

The Turn was Q♦, again bringing no help to both players, but hereafter the check of Duhamel, Affleck goes all-in, followed by a call.

The river card was dealt, the 8♦, giving Duhamel the straight and getting Affleck eliminated.

We just cannot skip Daniel Negreanu’s Epic Bubble hand when we are talking about the worst bad beats in poker.

Joe McKeehen bet with his J♦ 3♦, and Daniel called with his A♠ 4♦. The flop was 10♦ K♣ A♦, instantly giving Joe a flush draw and pairing Daniel’s Ace.

Hereafter, McKeheen bet 700k, and Negreanu instantly responded with an all-in raise of 5.8 million. The turn was a 3♥, which pairs Joe’s 3♦, but Danie’s pair remained the better.

The river was Q♥, giving Joe the straight but also kicking our Daniel out of the tournament, leaving him in 11th place.

Just a few years ago, we witnessed one of the worst bad beats of all time. The hand faced Brandon Caputo with A♠ A♦, and Harvey Matthews, who had the worst hand in poker 7♦ 2♦, or is it?

The flop delivered a 10♠ 2♥ 3♦, which paired with the deuce of Matthews. The turn provided another diamond, the 8♦. After this deadly flop, both players went all-in. Indeed, for Brandon, the river delivered the Q♦, giving Harvey the flush and winning him the first WSOP Gold Bracelet.

Without any doubt, one of the worst bad beats of all time in poker happened in the 2008 WSOP Main Event. The table faced Justin Phillips with K♦ J♦ and Motoyuki Mabuchi A♠ A♣.

The flop delivered A♥ 9♣ Q♦, making the pair of Aces of Mabuchi to Sets, but still giving hope of Phillips for a straight or Flush. The turn card made things even more thrilling, as it was the 10♦.

The river card made things absolutely insane, as it was the A♦, giving the Royal Flush of Justin Phillips and quads for Mabuchi. After this insane hand, in which both players were all-in, Mabuchi was eliminated from the tournament.

Bad Beats Happen to Everyone

Undoubtedly, these are the worst bad beats in poker. It is never a pleasant experience to lose that kind of hand, where all statistics and chances point out that you are the one who will win.

Although, as you can see from the list below, even the best poker players lose to bad beats.

It is, therefore, important to stay calm after such an experience and move past it. Bad beats are likely to happen, no matter if you are playing on one of the best online poker sites or in official poker tournaments. Therefore, you should be prepared.

How to play video poker? Your Best Poker Guide