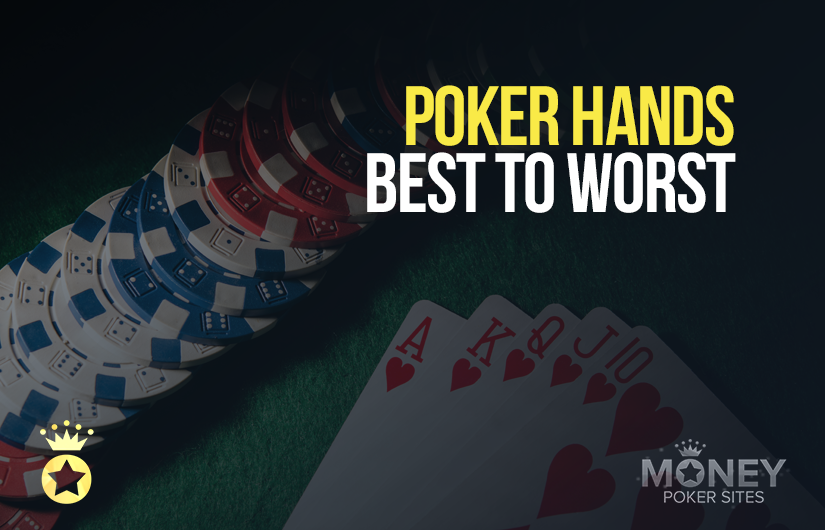 As far as gambling games go, poker tends to be on the more complicated end of the spectrum. This is not to say that poker is complicated, by any means. If you give your best, then you’ll be able to learn how to play the game rather quickly. But you will need to invest some effort in learning the hands in poker from best to worst. Below you’ll find our list of all the poker combinations that you can get – and their value.

If you can get a royal flush in poker, it means that you’ve gotten the best poker hand that the game has to offer. Royal flush consists of an ace, a king, a queen, a jack, and a 10. Moreover, the cards have to be of the same suit so that the hand can consist a royal flush. This hand beats all other hands in poker.

A straight flush is similar to a royal flush with one major difference. The difference here is that it’s made of suited cards that don’t contain an ace. So, an example of a straight flush would be a suited 4, 5, 6, 7 and 8. It’s the second-best hand in poker and you’d be lucky to get it.

As the name suggests, a four-of-a-kind consists of four identical cards of different suits. It could be four kings, four aces, or any other combination of four cards. It’s a pretty strong hand, too, and it’s also known as a poker.

Perhaps the most popular hand used in movies, a full house consists of a combination of three identical cards with two identical cards. For example, you may have two 6s and three queens. This would consist a full house – it’s a quality hand that you don’t get as often at the table.

If you get a flush, it means that all of your cards are of the same suit. They can’t be consecutive cards, as this would constitute a straight-flush or a royal flush. So, you can get a suited 4, 8, 6, 7, and 2 – and you would have flush in poker.

If you have a straight in poker, it means that you’ve collected a combination of consecutive cards. For example, a straight would be a 3, 4, 5, 6, 7 hand combination. Of course, the hand needs to be off suit, otherwise, it would be a straight flush or a royal flush.

Much like a four-of-a-kind, a three-of-a-kind consists of three identical cards of different suits. For example, you may have three jacks or three queens.

Next off comes the two pair card combination. To get it, you’ll need to have a hand of two pairs of identical cards, offsuit. For example, you may have two 7s and two kings. The strongest two pair combination is a pair of aces with a pair of kings. Remember – if you get two pairs of aces or two pairs of kings – it means that you have a four-of-a-kind.

Nearing the end, we have the one pair hand combination. To get it, all you need is a single pair. It could be two 6s, two aces, two kings, etc. In the best-case scenario, this would be a pair of two aces.

Lastly, we have the high card. Many times, as you play, you won’t be able to combine cards into the higher rankings. What you’ll be able to make use of is the biggest card that you can get your hands on. In the best-case scenario, this would be an ace.

The Worst Hand in Poker

Now you know of the ladder of the poker starting hands ranking. You know which hand has the power to beat another hand. You know which hand is weaker than which other hand. But the question remains, what is the worst hand in poker? Well, the worst hand in poker would be one where you don’t even have the potential to get a winning combination. For example, a good example of one of the worst hands in the Texas Hold’em variant would be 2-7 off suit hand. This means that you don’t have a great chance to get a big hand. This is not to say that it’s impossible – nothing is impossible in poker. However, by laws of probability, you won’t win the round based on your hand strength alone.

The Highest Suit in Poker

In most instances, the suits in poker all have the same worth. This is the way the rules are set in Texas Hold’em, too. However, there are some poker variants where the poker suits are assigned value. If this is the case, then starting from worst to best, the suits are ranked as follows: clubs, diamonds, hearts, spades. So, spades would be the most valuable suit to have.

How Many Card Combinations in Poker Are There?

If you’re curious to know how many poker hand combinations are there, the answer may surprise you. Since poker uses a 52 -card deck, it means that there are potentially 2,598,960 card combinations. This is a lot, by any means, and it’s a part of what keeps the game of poker so entertaining. It seems that there are limitless possibilities when playing, for all practical purposes.

Once you’ve learned how the cards and hand combinations are ranked, it’s time to play some poker. You’ll learn soon that it’s not just about the cards that you’re holding – it’s about how you’re holding them. It’s also about how you play them. If you play diligently and pay attention to the game, then you’ll learn how to win big pots while bluffing. This is one of the biggest pleasures that you can achieve in poker – and it’s a sign of mastery.

Blitz Poker - Rules, Strategy And Info On The App